Contact us on 01248 410320 or Email: bryncelynanglesey@gmail.com
Bryn Celyn Farm Shop > Uncategorised > From suburbia – to utopia on our small-holding. Ron and Margaret’s story !

From suburbia – to utopia on our small-holding. Ron and Margaret’s story !

From suburbia – to utopia on our small-holding. Ron and Margaret’s story !

Once upon a time, Margaret (moi!) was born in a mining village called Easington Colliery in County Durham. The village was 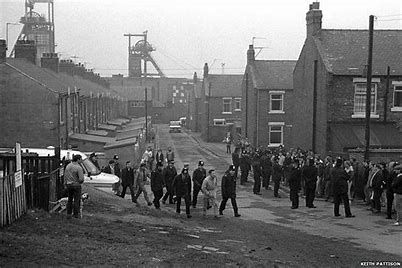 the site of huge unrest during the miners’ strikes of the 1970’s and 1980’s.  The village’s other claim to fame is that it was  where the film “Billy Elliott” was set. The street in the photo (left) was in the film. I didn’t stay in Easington but went off to university when I was 18 to study French and German ….  I spent the long, hot summer of 1976 in Freiburg in Germany.

Someone else was in Germany in the summer of 1976……. my future husband….

He was one of the real-life Auf Wiedersehen Pet bricklayers…….. who spent much of his time living on a pig farm there (!)

Those of you who visit our farm shop and know Ron – can you guess which one  he is ??? (Not the one in the skirt !)

No, Ron and I didn’t start our romance in Germany in 1976 (don’t think we would have still been

So how did we get from a suburban housing estate

where everyone left for work at 7.30am and returned at 5pm…… and didn’t know their neighbours……

TO THIS ????? Living on Anglesey, on a 12 acre small-holding, having set up our own farmshop and bistro in a converted stable ????

Keep following us, and we’ll blog some more and tell you about the journey….

PS Ron is the one second from the left !

All about a dog nobody wanted!

The stable is on its way…. just in time for Christmas

Giving birth to babies in a storm

How not to retire in one easy blog !

Leave a reply Click here to cancel the reply